Gain inspiration from the wonderful and talented artists we work with, as well as the latest news from Bothy Threads.

Time for a Bothy Holiday?

I was going to write a little blog about bothies but I got engrossed and found so much of interest that I thought I’d split it in two! So, this one is about bothies in general and we will have another blog in a couple of weeks about our Bothy in Cumbria!

The term Bothy comes from Gaelic ‘bothan’ meaning a hut. Historically a bothy is a small shelter or cottage built for labourers. As hill farming declined walkers began to use the deserted buildings and ‘Bothying’ became the word used for this activity. The mountain bothies association (MBA) was formed in 1965 to save the bothies from ruin. 50 years later in 2015 there were about 100 bothies in their care. The MBA works with landowners and each has a maintenance officer who is responsible for an individual Bothy and is helped by many volunteers. Most of them are in Scotland (including the islands) but there are a few in remote parts of Wales and Northern England. Usually a Bothy has two rooms- a but (kitchen/living room) and a ben (bedroom).

Many of them were for former estate workers or shepherds huts but there are also an ex YHA, a schoolhouse, crofter’s cottages, a coastguard watch station and a few purpose built bothies. Most of them are in remote settings nestled in the mountains, in glens and by lochs and the sea. Sounds and looks idyllic doesn’t it?

Bothies are unlocked and free to use with no booking (well not at the moment because they are all in lockdown!)

BUT… before you pull on your boots and start visualising an idyllic summer holiday ahead read on!

Firstly you will have to walk or cycle there….carrying all your stuff. This should include a tent (in case the bothy is full)! Routes can be many miles long and often over mountains, through bogs and even involve wading through streams.

The bothy is weatherproof and usually has a stove or fireplace but there is no fuel, no light, no water and no toilet. You sleep on the floor or a sleeping platform. Basically, it is dry camping.

Now anyone who has ‘enjoyed’ the full outdoor Scottish experience will know about the ubiquitous ‘wee beasties’ (midges)! They are tiny but there are so many of them. Some people have mosquito zapping machines and collect dead midges by the black bin liner full. Dawn and dusk become feeding frenzies and without a fire, midge repellent and a midge net you are eaten alive. So, don’t forget to pop them in your rucksack!

I do have a confession here! I have walked a lot in Scotland and looked at many bothies but never stayed in one overnight. Having written this blog, I must admit I feel pretty ashamed of this. It is now high on my ‘to do’ list once we are allowed ‘to do’! Anyway, my good friends Nell and Kevin, who live in The Highlands, are old hands at this and here they are on a night out bothying.

Part of the bothying culture is the ‘Bothy Book’. Most bothies have a visiting book where you are encouraged to record your visit. They make interesting reading with tales of joy and anguish. Many bothies have tales to tell but I think this bothy called ‘The Eagle’s Nest’ on Lewis is the most poignant. It was designed and built by John and Lorna Norgrove. It is a simple wood and stone wigwam like structure, with views (if the weather allows) to St Kilda. In 2010 it became a memorial to their daughter who was an aid worker in Afghanistan. She was kidnapped and died in an attempted rescue mission. They have set up a charity ‘The Linda Norgrove Foundation ’in her name to continue her work. They especially support women’s education and their web site is so inspiring, do take a look – Mangersta Bothy | The Linda Norgrove Foundation

There you have it, a potted background to bothies. Next week’s exciting episode will feature the story behind our very own bothy. Meanwhile…Happy Stitching! 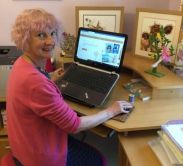 I have finally converted a small spare bedroom into my very own craft room! I love it because it overlooks the garden… 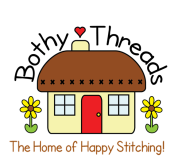 When I started the business in 1992 I was living at home near Reading. My parents were very excited and supportive. Mum…