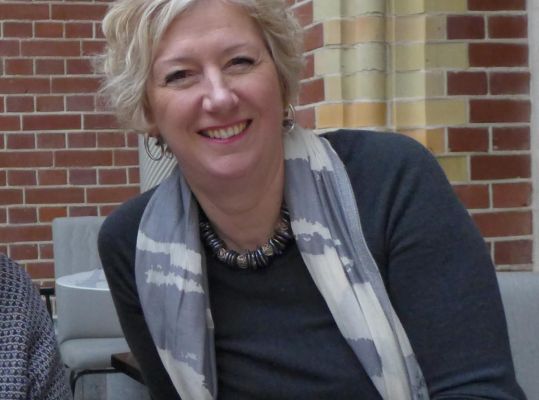 I was brought up in northwest England and moved to London to study art at Middlesex University. My career initially began in textile design, creating floral patterns for many major high street stores such as Top Shop, Dorothy Perkins and Debenhams. I began as an illustrator, by accident rather than design, when Boots licensed some of my floral designs for use on gift-wrap. After a couple of years, I found that I had moved out of the fashion industry and become a full-time illustrator, mostly for greetings cards and wrap. I really enjoyed the freedom of working on a much wider subject matter, I still do floral designs from time to time but now I am probably best known for cat, dog and Christmas images. I originally had two dogs, Rosie a fox terrier and Florence a cocker spaniel, which frequently appeared in my work, they were really quite famous! I now have a black cat called Rudolph who just arrived at our door one Christmas eve and moved in, he also features in my work. I now live in rural Suffolk where I can work from my studio at home and look out onto beautiful views over the countryside.